I was recently asked about my gauntlets, so I thought I'd submit my notes.
I ordered a pair of ESB Gauntletts for my son, ignorant of other sources, from Bloodsport studios (and I use the term 'studio' loosely). Here's my conclusions after being older and wiser:

1. Be ready to sand and use a dremel tool. They are
very rough and have lots of excess resin and microbubbles. This includes the thickness of the gauntlets which varies from minor holes to overly thick. This
also makes them heavy. I had to cover a couple of holes with furniture putty that worked well.

2. Getting the two halves to match up is a challenge.
There's a variance in the widths and it can be overcome, but jeez. Also, you'll be trimming the ends, one gauntlet had to have an inch sawed off. The lengthwise areas of the gauntlets were at off angles and had to be dremelled
to have the two halves flush together. I was only marginally successful.

3.They were $ 135 and showed up promptly. Would I buy them knowing what I know now ? No. I'd contact someone well liked and respected and go with them. As it's proved that he's a recaster and you cannot knowingly support that considering what a 'labor of love' this stuff is.

I am frankly amazed at the level of quality and performance from people making everything from jet packs from Bobamaker to flak vests from 'batninja' to gauntlets from Ruffkin and many more. I'd hire all of them to come work for me, if such a thing were possible.
H

that's pretty much what everyone has said. Good luck with fixing them up.
G

Fix them up, throw them on ebay, and buy Ruffkintoy
L

I'd do that, but selling them to some other poor sod to solve my problem, solves no ones problem. That and my son is learning how to make something work that's not ideal. A good lesson in todays,"I want it now and it has to be perfect," world.

So, if they're a recast, and the shells dont' match up, does that mean that the work they cast from also didn't match up, of they're a shoddy recast?

As far as I know, it's just a shoddy recast. I have seen some other recast guants that didn't match up, but it was only because they were poorly molded and cast.

Its good to see a thread like this. But be warned, a number of the sellers of what we look upon as recasts etc, lurk on these boards and contact those who criticise them publicly. I have had the same problems from a well known seller who isn't one of our favourites. Just giving you a heads up!
L

If that's as rough as it gets, let him come. I emailed my thoughts on his work to him anyway.

i go to the rufkintoy's web site but i dont see the page for buy anything ! i dont know how to make a deal with them !
E

I bought a pair of BSS gauntlets many months ago prior to my knowledge of TDH and I ordered a set from Ruffkin as soon as I could. BSS gauntlets were poorly made and with all of the tools I have I couldn't get them to fit properly. I hinged them, sanded, filled and sanded...all for not. I almost took them to the gun range and used them for skeet.
G

lorenreale said:
A good lesson in todays,"I want it now and it has to be perfect," world.
Click to expand...


A lot of people here do the "I want it now, and if it's not perfect, I will make it perfect" route.
J

Check out these two threads:

It seems a lot of people on here have had a problem (or problems) with this person.
N

This morning i got my jet pack buy from im on Ebay ! I have never see that ! Poor quality , Not complet , tell jet pack is made in fiberglass i receive resin jet pack (lots of excess resin and microbubbles) . For 250$ + shipping That make me uke

Yeah I also bought some this past April, theywere heavy as heck and I did alot of sanding and dremeling. I only bought from him because I had a event to do at the end of that week I figured it will only be for that one event and it will be dark. So I grabbed a couple of spray paints and went to town. I'm not a good painter and didn't want to put that much into it being it was only going to be for that one time, any how heres how the tops came out, they servered their purpose and now they collect dust. 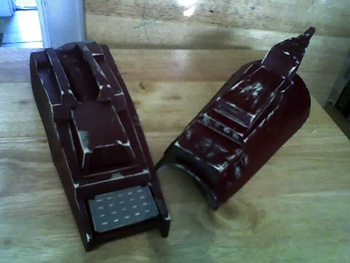 I still think Vaticast Studios and Bloodsport Studios are connected somehow, if not the same. Their auction layouts and many of the pictures were the same. Maybe they dropped BSS to finally combine forces as Vaticast.

I dunno...I'm a conspiracy theoretician at heart.
W

I've got a pair of BSS laying in the garage if anybody wants them, for a paper weight or something.

I got a pair from BSS collecting dust as well. Never even finished them. I waited and bought MOW instead.
H

batninja said:
I still think Vaticast Studios and Bloodsport Studios are connected somehow, if not the same. Their auction layouts and many of the pictures were the same. Maybe they dropped BSS to finally combine forces as Vaticast.

I dunno...I'm a conspiracy theoretician at heart.
Click to expand...


you're probably right...like a sockpuppet ebay account or something.

A Fistful of Spaghetti: sutt_hero_rotj

a question about 3D printers

A Fistful of Spaghetti: sutt_hero_rotj

a question about 3D printers