Just throwing out an idea and wanted some input on it. I am starting to make my own bucket from scratch, starting with cardboard as a template then using fibreglass. I need this really hard because I will be turning it into a helmet for paintball. I want to know what everyone thinks of a black fett bucket. Oh and I will have lots of pics of my buildup as I go. Thanks to all and here is a pic of my paintball gear with a computer generated image of a black bucket. Let me know what you think. 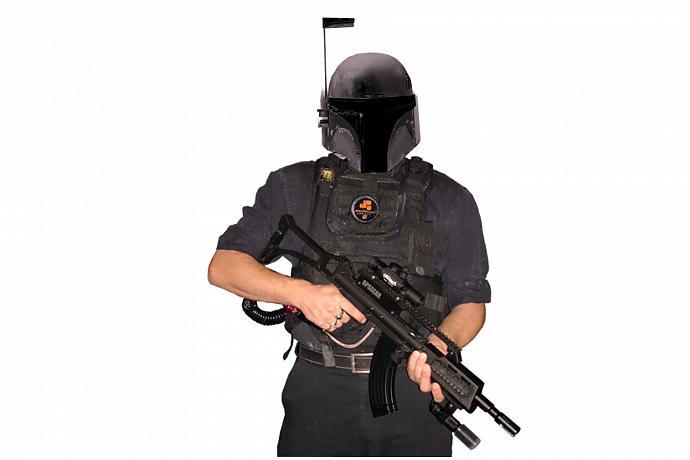 I would suggest reconsidering. Although it may look cool, you will have very low visibilty. It can also be hard to look uop and down and maneuver your head. But who knows, maybe you can pull it off.

The color scheme is cool, though.
N

looks pretty cool but i hope you don't mind getting shot. alot. visability is not the best in these helmets. If you are going all black, you could make the whole front out of black plexyglass shaped like the fett bucket to give you a little more visability.
N

ok, few things man
1) sweet color idea
2)spec. ops rules!!
3) its a horrible idea to play paintball in that helmet....u cant see a dang thing! and itll fog up like crazy...but wait, u say it wont fog up becuase the bottom is comepletly exposed? well....imagine gettin a shot up into the face....bro, its just got a good idea, id say...
get a reg. face mask and paint the heck out of it to make it look like fett...in fact..i may do that....thread upcomming!

Would be cool, but- You would be at a disadvantage to an opponent with a full face visor i would think.
J

It sounds like a cool idea, but if you're gonna be runnin' arnound, there is a very good chance that the visor is gonna fog up on ya.

indeed this is cool, but you won't see anything

unless you rig that thing up with cameras

Community Staff
I can see it working but you will definitely need to reinforce it, add some fans to keep from fogging, pay attention to your surroundings, work on your hearing, and cover your movements since you cant go prone.
M

Ok I will concider the visability issue and i must say that fans are already an issue I have two lined up to go inside as well as full commo package. and the bottom would be a little more closed than normal as well. Thanks for all the info and maybe i'll just make one for the **** of it. I'll update later...
P

I think it will look awesome! You should maybe not include the RF and most definately make the T-visor bigger.Like everyone else said visibility is not the best in the Mando bucket (better than a TK), but if you trim down underneath the eyes and the peripheral part that you might be ok.
Is that your paintball gun in that pic??? Looks wicked
Last edited by a moderator: Nov 16, 2006

Im planning on a (mostly) black custom mandolorian helmet, but as these other guys have said....it may look cool for paintball but you will likely end up shot because it will hinder your visibility and fog up quickly....best of luck to ya

Looks great, but as a paintball field owner, I can say that no established field would ever let you use that. The liability would be way to high.
N

mrgr8ness said:
Looks great, but as a paintball field owner, I can say that no established field would ever let you use that. The liability would be way to high.
Click to expand...

I agree I used to ref at one of the local fields when I lived in New Jersey and there is no way we could let you use that.

I suppose if you are gonna be playing at your own risk in he woods or where ever then you could get away with it.
M

Is it the visability issue or the fact that it is fibreglass that would keep me off the paintball field? If it's because of the fibreglass that can be changedquick enough, if it is the poor sight I can widen the opening in the visor more maybe. Other than that it will be thick enough to hold up against 300 fps, that i would make sure of before using it and it would all be sealed around the visor. What else would keep me off the field? Thanks
L

Dont quote me on this, but I think your problem is going to stem from the fact that the lens in your helmet isnt rated (most likely) high enough to withstand the impact of a paintball. It may actually be strong enough, but if its not an actual paintball mask, theres really no way for the referee to KNOW that its capable of protecting your eyes, so they wouldnt let you use it. That would be like going to play in a pair of sunglasses that you may know will stop a paintball, but since the referee doesnt know that, he has to assume they arent safe enough....It also doesnt help that your helmet wouldnt look like a conventional paintball mask, and that would make any park owner leery of letting you use it at their place.

I'd say your best bet would be to take a paintball mask and modify it to look similar to a Fett helmet. That way youve got the original eye protection from the paintball mask, which is the most important part. I dont think the field officials will really care one way or the other about how much visibility your mask provides you. Its the eye/face protective aspect that they must look for.

I dont have a paintball mask in front of me, but I cant imagine a conversion would be all that difficult. The goggle part of the mask would be a good place to build a Fett helmet off of. You could shape the front cheek pieces around the front part of the paintball mask, and then find something to cover the back of the mask, forming the back part of the Fett helmet. The most difficult part would probably be forming the top part (round dome) of the helmet. Your best bet would be to convert a batting helmet or some sort of polymer military helmet by hacking off certain pieces and attaching it to the rest of the setup.

It might be an interesting project, but in all honesty youre going to have a hard time getting the park officials to let you wear it, you will probably be pretty uncomfortable, and I dont know about you, but I think I'd be afraid that a paintball impact would not only hurt my face but also break my mask. You will probably have to do some extensive gluing and I just dont think glue will give enough strength to stand up to that kind of impact......best of luck to you bud!
Last edited by a moderator: Nov 16, 2006
M

Ok thanks to everyone out here for the info. I will not be using my fett bucket for ballin. I will however keep making it just because i love the look of it and i will also make another one that will attack to my paintball mask and make it look like a bit of an updated version. If I do, pics will follow. Happy hunting
N

Paintball aside. There is a least one Fett out there that is totally Black and shiny. Nice. Don't know who or have any pics but I"m sure someone knows.

Its kind of funny how I originally wanted to use the chest armor for paintball. and thought about it as well to make a workable helmet. Now just from my helmet, Im actually surprised at the visibility I have. I have perifrial vison, and I can see down below as well. Granted its not as "great" as a regular mask's visibility, but its quite adequete. Another thing is the fogging issue, when's the last time your goggles DIDNT fog up?

Now for strength, you can modify the same way they install the visor's on regular masks, where they have notches that stick up. and are held in with little pegs. You can just find a realy sturdy piece of clear plastic or something you know for a fact can withstand paintballs. Everything else could be made out a strong matrial for protection.

I had to scrap my paintball armor project, I was never able to make a successful vest to hold it all together.