Bear with me as I do these two projects simultaneously. I plan on using techniques and lessons learned from the the ROTJ paint up, stencils from RAFEL, and guidance from Jayvee. This place is an awesome resource for these hurdles.

First off I have a SGB V2 McQuarrie Helmet that is going to be weathered. I received a bit of friction for not weathering my V1 :/. This one will have a weathered paint gig reflecting the principles of both the ESB/ROTJ/PP2 tastefully. Not sure how this is accomplished just yet, but you'll see the updates.

Next up, is an Animefan Premium CC fiberglass bucket. #### me sideways, prep was a breeze thanks to his casting, but the road that lies ahead is going to be a long one. Reference photos and everything aside, this is going to be done right.

I saw the combos for the replacement of the floquil Caboose, but does anyone have another suggestion for the color involved? Tempted to buy a gravity fed airbrush just for testing!

Finally was able to tackle to back panel of the ROTJ build. No joke on the masking as mentioned in previous threads! Just finished the green as I will have to take about a month break from this. Since the floquil colors from Jayvee's paint up are no longer readily available, I was able to find a hunter green rattle can color that was about a shade lighter than the one on the rattle can list. I did a paint test of the 2, and sure enough it's right where it needed to be! Letting the cold cast of the casting take the role of the silver layer, which saves a step in this case.

Still a Rusto color, this can color is slightly lighter than the regular Hunter green and much closer to the reference pics:

Layered Humbrol Gunmetal and Grey 67, masked and ready for green:

Still Need to do the over spray grays, additional razor blade work/scratches, and the key slot area, but that will have to wait! This one has been fun so far!
5

Back panels complete. Moving on to Dome!

The back panels look great! Keep up the awesome work!

Quite the process. Enroute to wrapping up the initial masking of the dome, and as everyone else mentions..."Holy ****!". About to lay the first layer of grey on that area, and I'm a bit nervous. The lack of deliberateness on the entire helmet IS much of a challenge for those trying to replicate it. Fun project nevertheless, more pictures coming this weekend. My apologies for the snail pace on this bad boy!
N

Well done. I got an animefan as well. Good on ya.
5

Finally make some headway on the Dome. It seems that once you get the back panels and dome complete, you really gain some momentum on this thing. This was a serious masking project. And that doesn't even start to include the detail work that everyone mentions that follows. Masking alone was an 8 hour project just to get it to this point. However the reveal of the masking made the process worth it. Upon pulling up all of the masking, let the paint cure, and then gave it a once over with steel wool.

Grays laid and masked (this was a 2 step process with the gunmetal and darker gray).

Next was on to the Green mix of 31 and 78. I think this mixed well and isn't too overall dark or light. Keeping in mind that there is a lot of other stuff going on top of this.

And Finally the Reveal! Looking forward to wrapping up the dome here this week.

Will eventually look right at home!

Wrapped up the misting tonight and did some initial detail work. Just when you think you're almost getting there!

Wrapped up the major dome paint and details. Will be hitting this again with some pastel weathering and final details once the rest of the bucket is painted. I think the worst is over.....

Had to adjust the proportions on the kill stripe side to accommodate the stripes to place correctly. Easy fix with some masking and spraying. Interestingly enough, the templates, as is, worked out perfect for the majority of the dome, specifically the dent area. However, they are a bit over sized when getting everything else on the kill stripe/backside laid in. 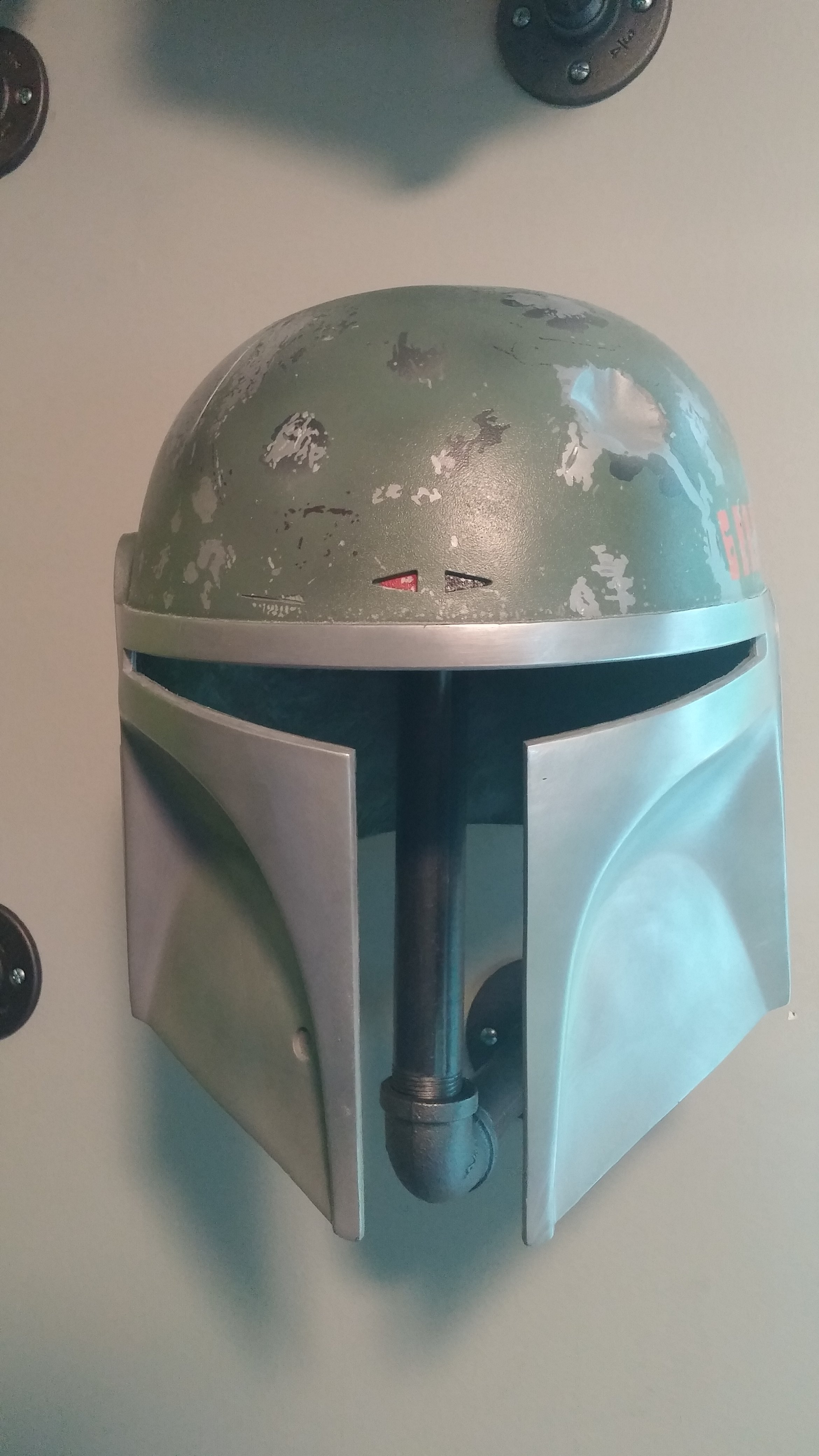 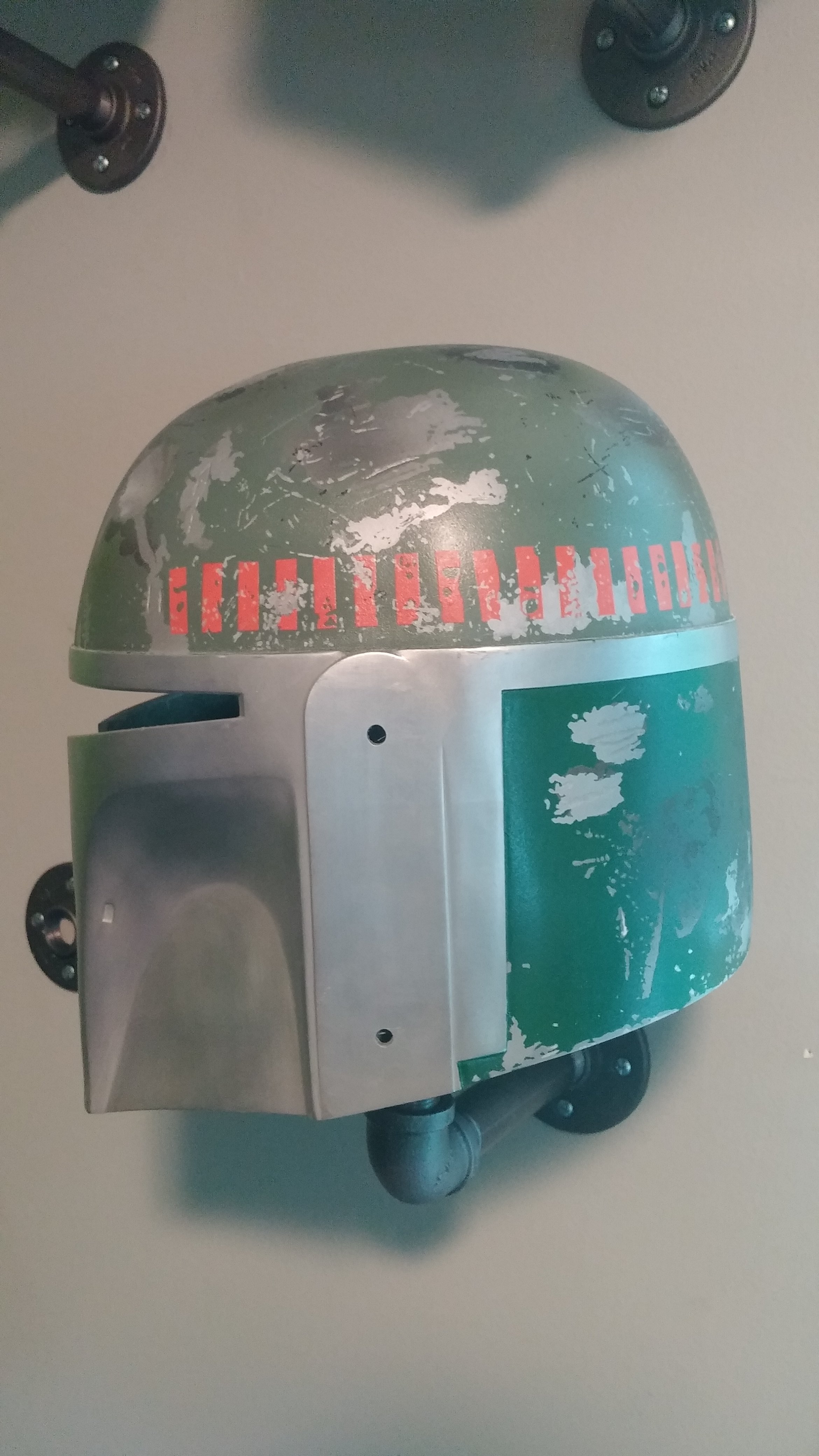 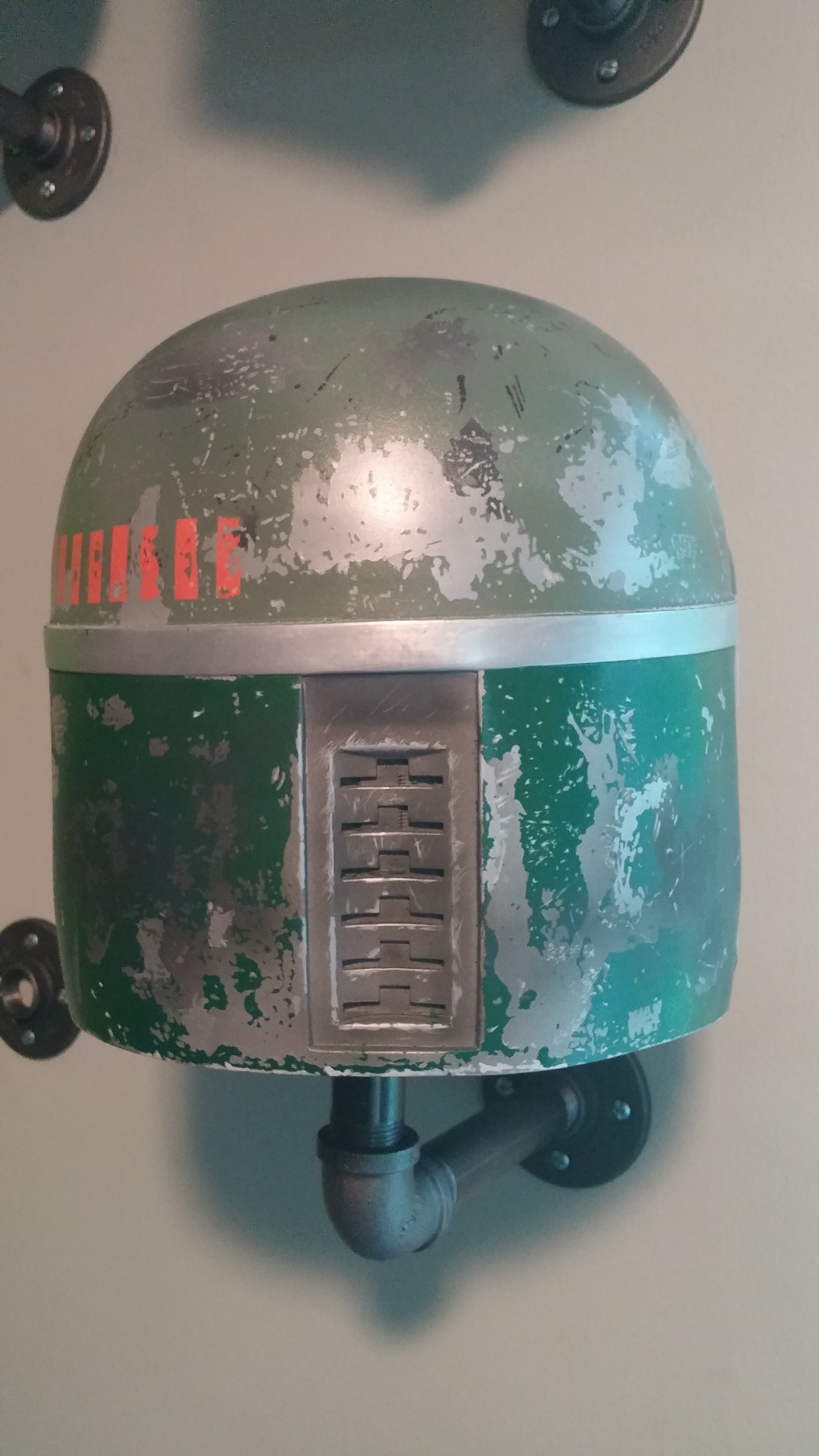 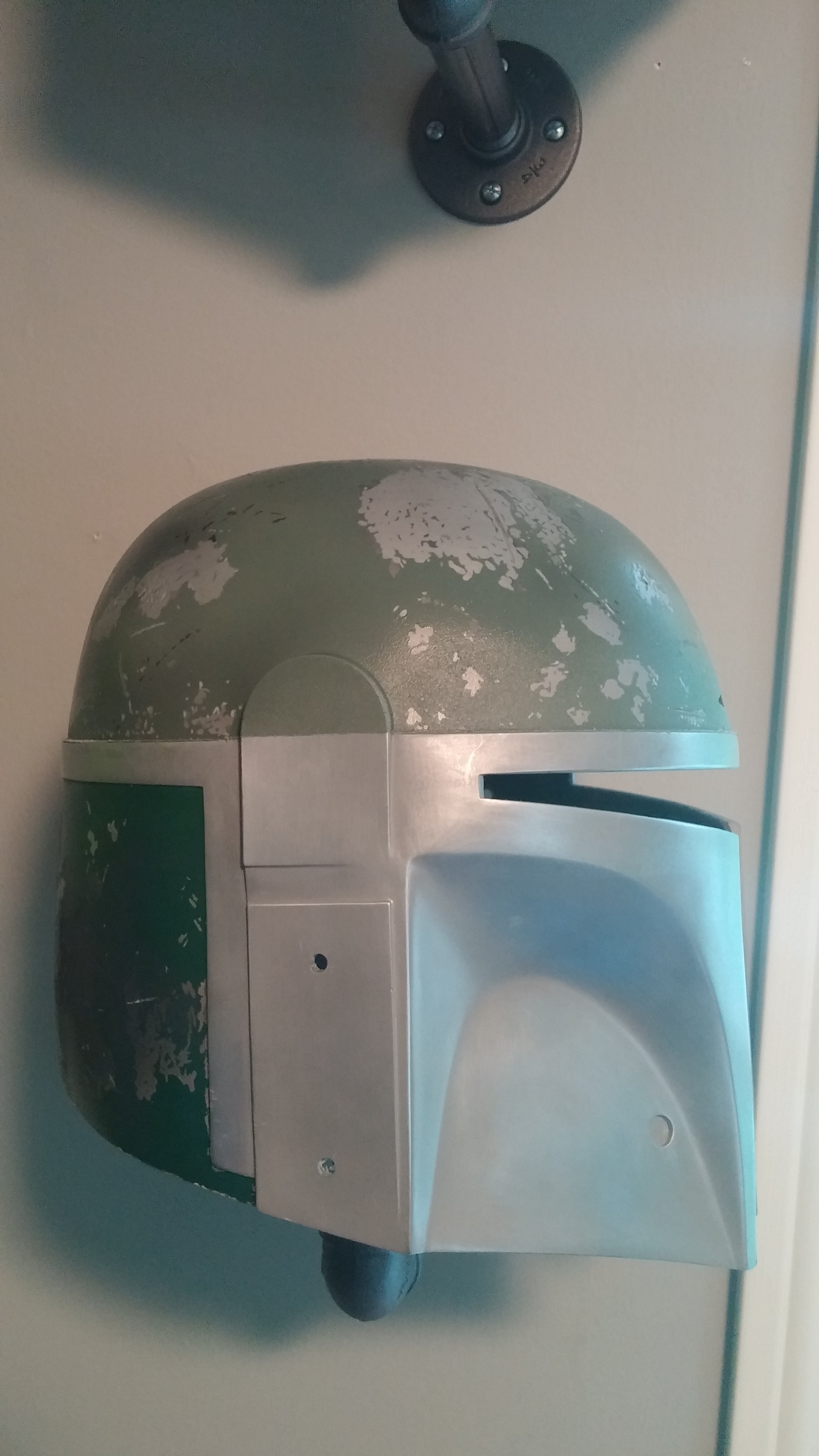 RotJs are in vogue right now. Good. People aren't being caught like a deer in the headlights by ESB. Finally...
5

Had some second thoughts after I sealed the dome with a different Satin clear coat last night. However, after rubbing some wire wool over it, and reassessing, it is just fine. There's a fine line between what all of you have produced in these forums, and what the photos of the originals show in terms of glossiness and reflectiveness both in the silver and major colors. My thoughts, in doing this paint up, since having done an ESB exclusively in Humbrol paints, is that this paint up was done in rattlecans....OHHHH!

Yep. Nothing other than rattlecans. The mixing and variations in the paint thus far in the dome and back panels warrant some additional research, which I will provide later. I don't think this thing was done with the deliberateness of the ESB, and because of the inconsistencies with the final product (and damage). There may be a thread on here that I have not seen yet but at the local ACE hardware today, I saw the equivalent of the mix for the dome/lower cheeks. Looking at what I did for my ESB a year or so back to this, the mix is no other than the "Sage" paint they now produce and on the paint up sticky threads.

This thing (the ROTJ pain job) was nothing more than reaching for the cans that the hardware store had at the time. As demonstrated by Jayvee and Rubio, the colors mixed were none other than the paint cans provided. Whether that was in the UK or US, is up for debate. Also, to attribute to my theory, between the back panels, and dome/cheeks process, and the randomness of the overall process, there is in no way that there was a deliberate process to choosing the paint for ROTJ. It was more of a spray on, reference, adjust, peel back layers, spray more with what was on hand, and that is what we're left with.

If I'm mistaken, please do let me know. More specifically, I really want to know what the original painter's thought process was with this.

Awesome project by the way, and has had me guessing after every layer!
5

RotJs are in vogue right now. Good. People aren't being caught like a deer in the headlights by ESB. Finally...
Click to expand...

To everyone intimidated by the ROTJ helmet, GO FOR IT! I was turned off at first by its' complexity, then realized the beauty in attempting. It will definitely push your skills as an artist, and if you totally F-up the first time, the lessons learned are what makes it worth it. I avoided this for 2+ years, but its going to make my PP1 (and corner piece) that much more awesome.

BTW...MQV2 Update coming soon. I was wrong for putting these in the same thread.
5

Completed the upper cheeks using Jayvee's Tamiya XF-17 base and MM Schwarzgrun misting. Gotta say, it was tedious, but got it pretty close. I'm also convinced that the original in fact had a satin, or some other clear coat over the rest of the painting process. It's dull on my end now, but after the detail and a layer of satin, should be pretty close. Hard to judge just how much Schwarzgrun to mist over the base. Found myself going in and outdoors quite a bit. I was concerned about a reaction between the enamels, and the acrylic Schwarzgrun, but non was noticed nor appeared throughout the process. Overall, I'm very happy with the outcome thus far.

I've been doing all of the applied damage based upon Rubio's initial pics and review of the FP ROTJ.

Surprisingly, despite how long this has taken, I'm surprised that it has not taken longer than what I thought. Just a steady pace throughout, and waiting for paint to dry. Next up, the mandibles.... 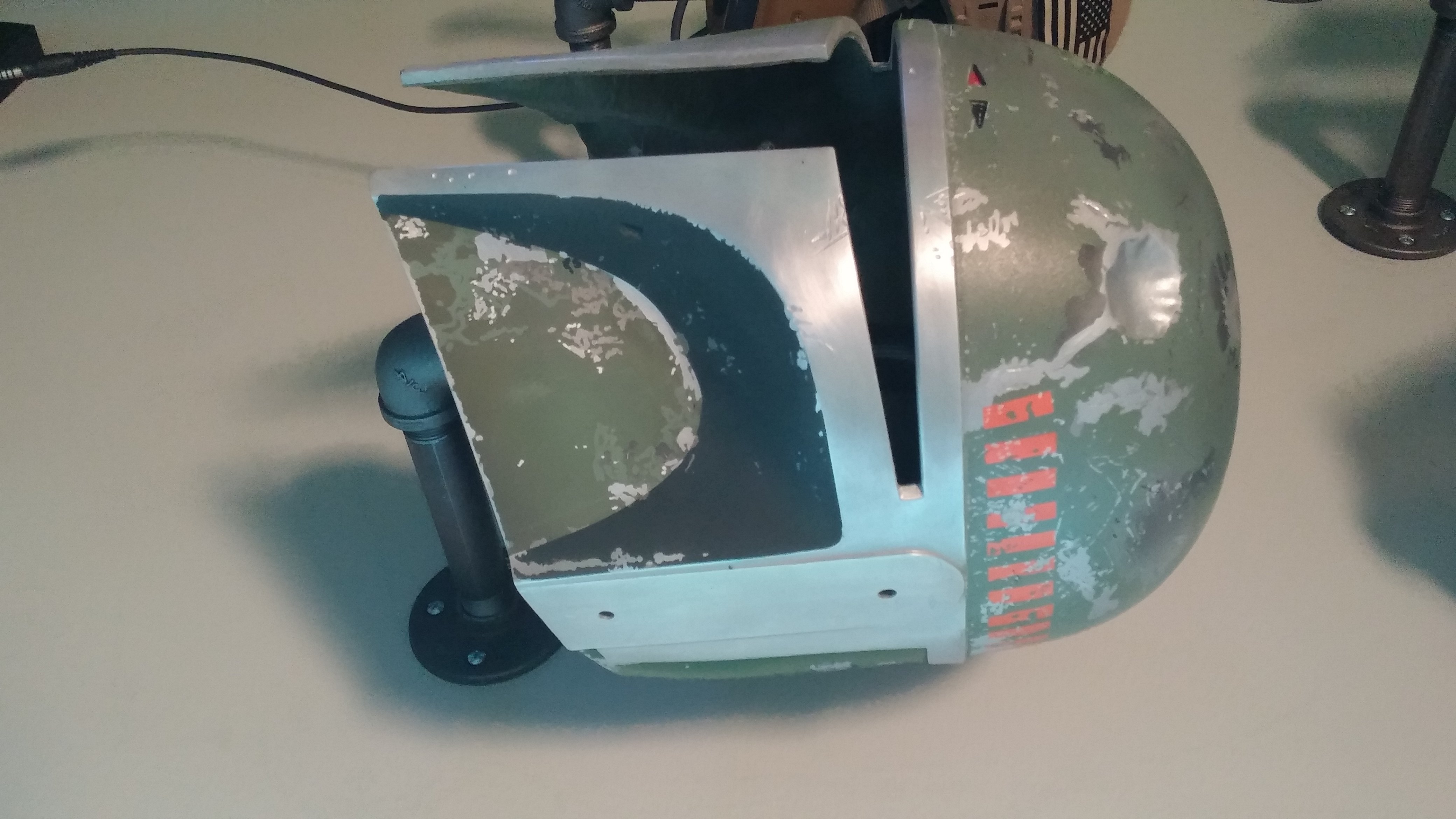 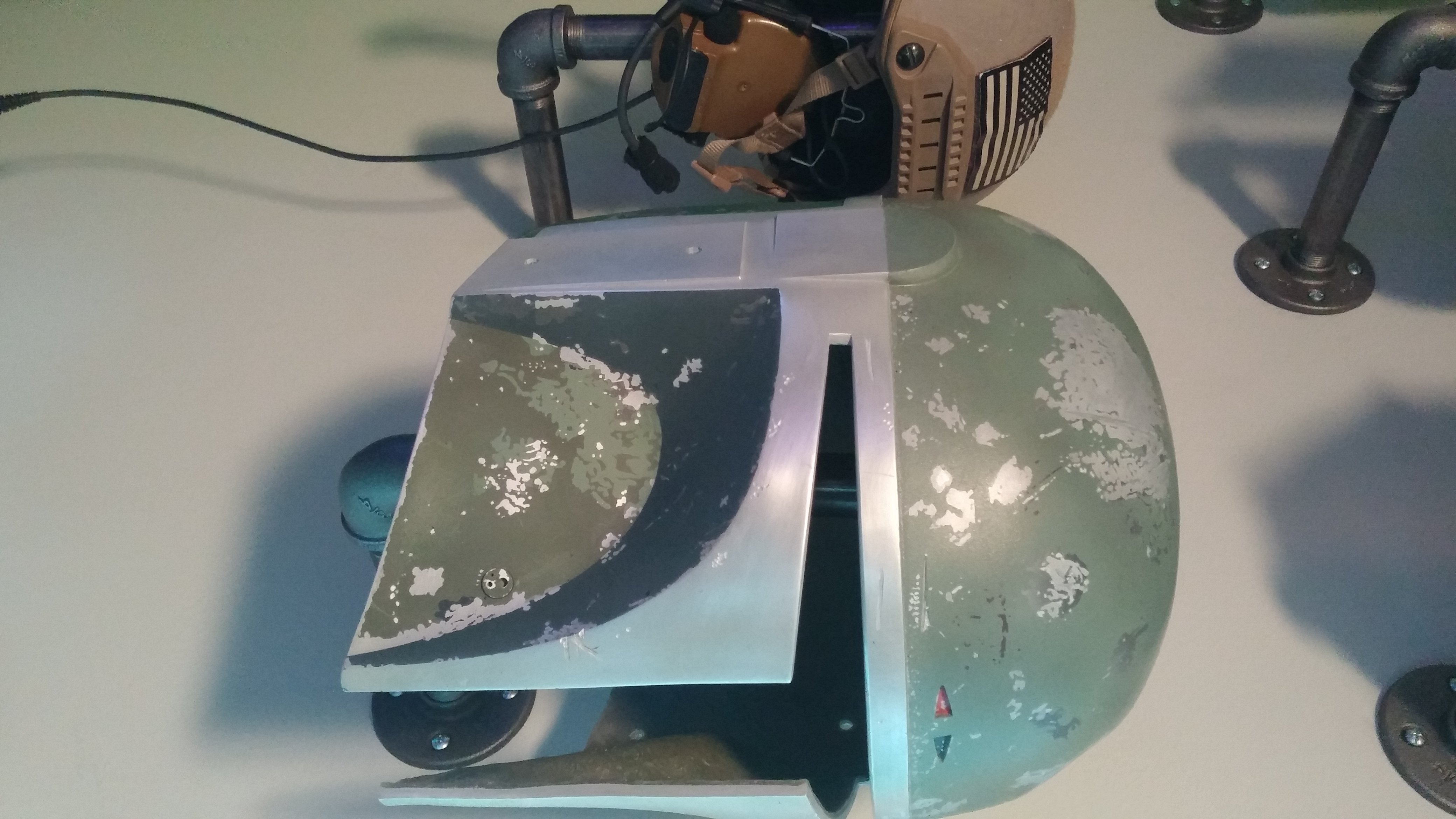 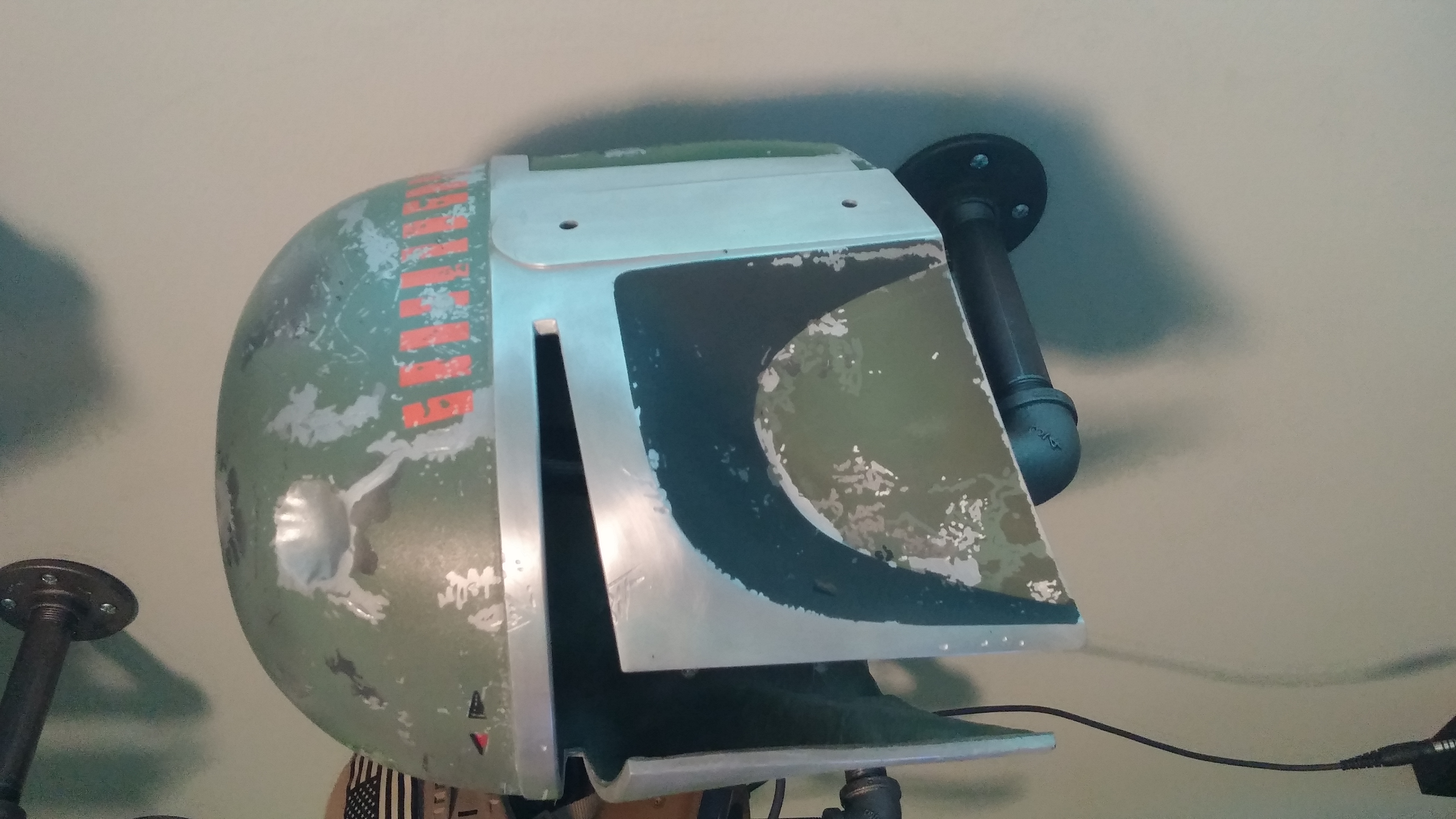 BTW, Animefan, Absolutely Awesome Cast! Thank you for your work in what you do, and sending the best quality out. Had very little to do on the prep end, and that is much appreciated!!
5

Well, minus a few details involving some pastels. But all in all complete. Very happy with the way this turned out, just wish I did not satin coat some of the previous layers. That's a lesson learned for next time as the silver cold cast dulls as you add this step. I left the most recent layers untouched on the mandibles. IMO it makes it pop. I would like to say thank you to Animefan for his awesome cast, Jayvee for his previous thread on painting this thing, and Rafel for his stencil guidance. At the end of the the day, this is a half way representation between screen used and Magic of the Myth. Still, it's my interpolation of the whole process, and I'm proud to finally have more or less wrapped this thing up!

Not sure why the pics won't rotate on this site.

Nevertheless, here is it next to it's ESB counterpart done by me roughly 2 years ago!

Next up, will knock out that SGB V2 from the lessons and techniques learned from both buckets. 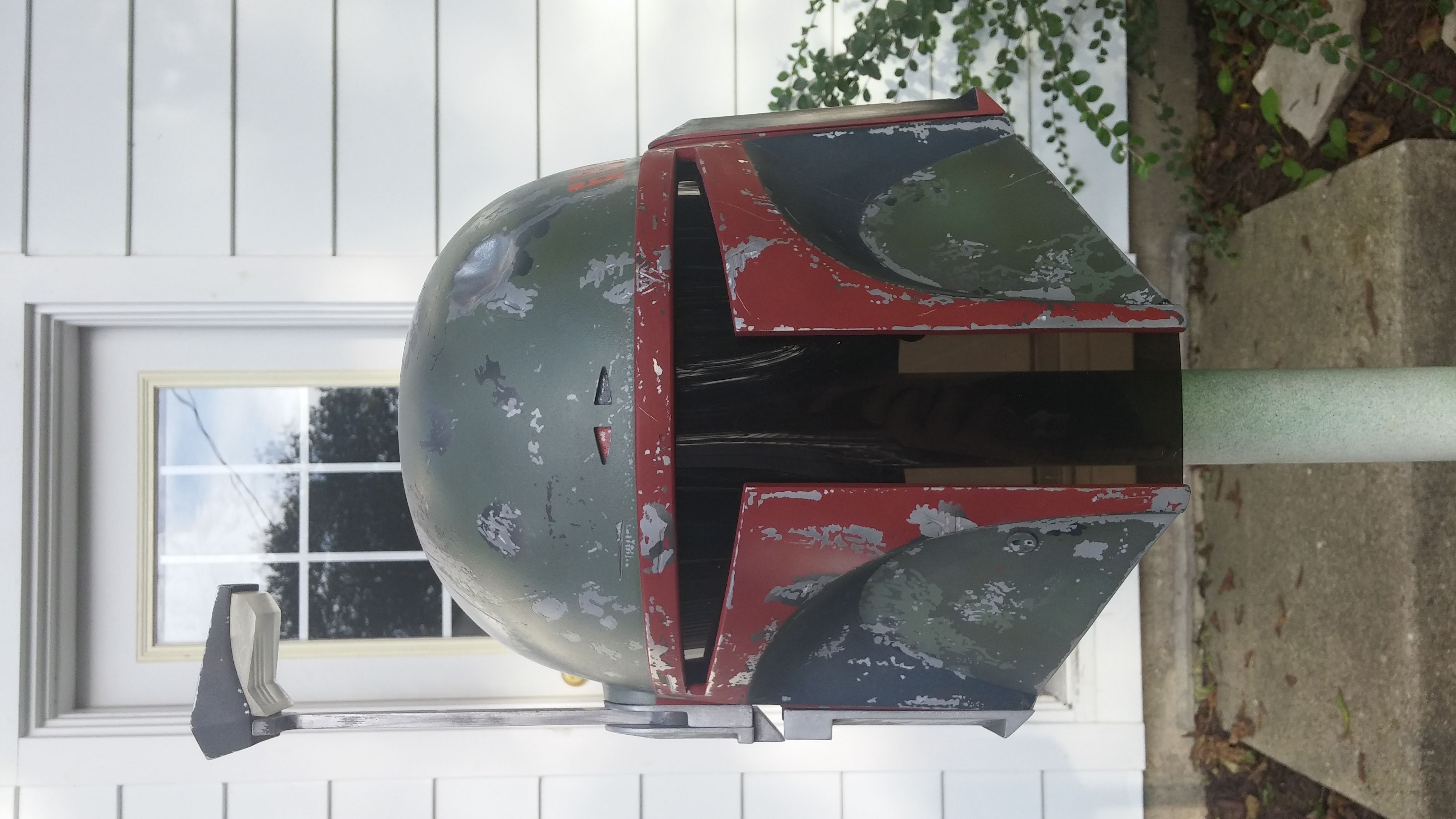 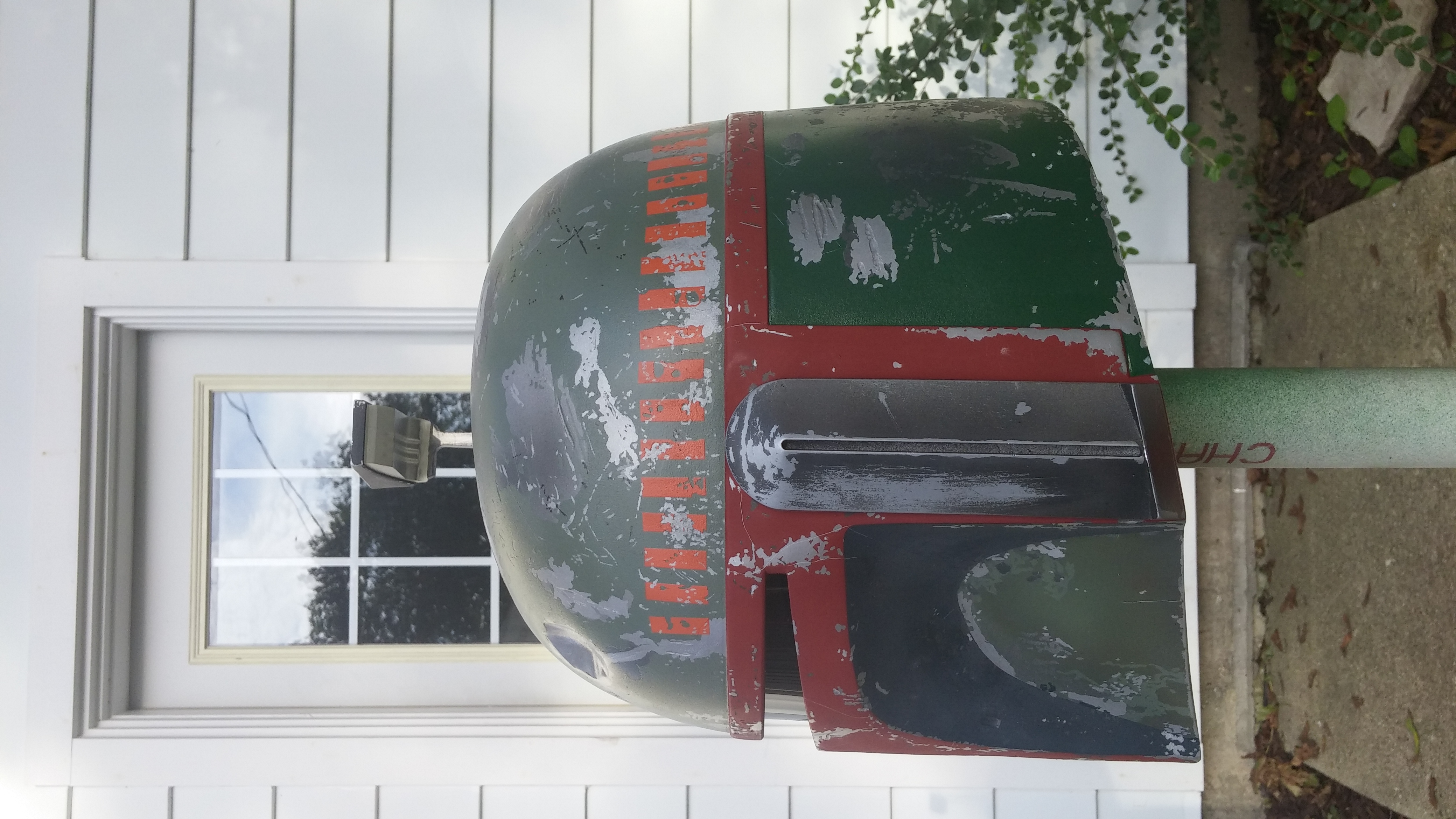 My Just For Fun ESB Build.