Greetings; I am finally (after putting it off for at least a decade) getting around to making my second Boba Fett outfit (my first was made of cardboard and aluminum foil and random things I found around the house when I was 14).

After much reading and planning and shopping around, I decided on 3mm Sintra (partly because that's what I could find on short notice, and partly because using a heat gun is easier and faster and quieter than learning how to properly work metal with a hammer). One thing I am wondering is how to give the appearance of thickness that all the best suits have. I've seen some trash can builds and Sintra builds that all look...super flat. All the great ones I've seen seem to either be thicker than 3mm and have a nice rounded edge bevel thing going on, or are thin and have what look to be folded edges, creating a kind of cavity behind them.

Here are examples of what I mean:

Thick with a bevel

In all the Sintra builds or guides I've seen, not one has mentioned how to achieve this effect. Since I began working on mine, I've noticed that the 3mm Sintra looks kinda flat, even once heat formed. I am using the WOF Large (6') template scaled to 98% to fit my frame (right between 5' 10" and 5' 11").

Does anyone out there have any tips about how to get this premium look using Sintra, a heat gun, and some patience? If I were to manually fold the edges, I imagine I would need to cut new plates with some extra on each edge and a notch out of every corner in order to facilitate bending them, yes? 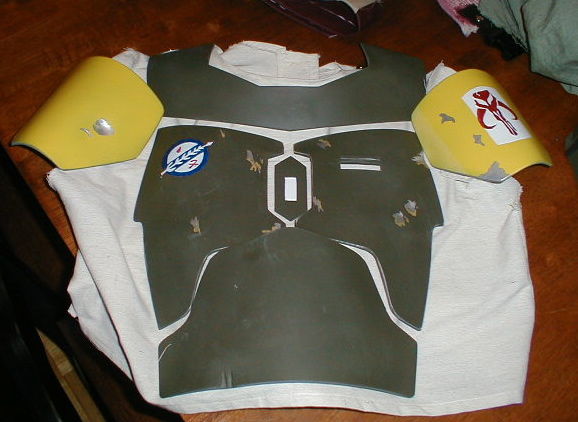 I agree with you on the use of 3 mm thick Sintra, it does look too flat. To get the desired look on my build I heated the edges & rolled them over to create the bevel. It isn't as crisp as a vac formed but give is more depth. I did add some epoxy putty around the back side & sanded & smoothed it to help give a better edge. I did this for the chest, abs, shoulders, cod, & kidney plate.

I did my collar, back plate, & knee armor with pepakura, so started as card stock & built to thickness with chip board & resin coated.

I thought 3mm was fine, but what do I know I just rounded all the edges with some course sand paper and followed up with a fine grade sanding block.
D

That looks pretty rad, and is a nice compromise between the sharp folded edges and the flat thick idea

How did you fold those edges? A or B? Or something else?

Also, did you have to oversize your template cuts to provide extra material on each edge for folding, or did the folds not significantly change the dimensions of the plates?

Also-also, how did you get Sintra to fold over like that? I heard it cracked if you tried to fold it back on itself like that (assuming you did either A or B in the sketch above).

@Ham - I think for this first set, since I am in a bit of a hurry, I may just make sure all my edges are smooth and round/beveled and make sure the paint covers them.
T

That looks pretty rad, and is a nice compromise between the sharp folded edges and the flat thick idea

How did you fold those edges? A or B? Or something else?
Click to expand...

I didn't use either of those methods. Heated up the edges till they were soft then hand formed the edge. All I did was roll the edge slightly to give it the illusion of being thicker & not flat. I put epoxy putty on the backside around the edges. This was sanded & smoothed to give a nice edge. Here is a better photo of the front & backside of the cod piece & kidney plate.

Oh, ok, just a plain curve then. The putty made it look like it was folded over or rolled. Thanks for clarifying.

I'm assuming you didn't need to oversize your plates to make up for the folded edge, since the angle of the bend is so shallow?
T

Bending didn't affect the size of the plates. When bending like that there is stretching around the radius & with it being so slight there wasn't any affect on the over all size. This does help lock the shape of the plates very well. These plates have proven to be very durable.

Using scrap sintra to add an extra layer around the edges should work as well. To be honest, I haven't worked with sintra or started my build yet but, this still seems like a viable way to add the appearance of thicker armor.
Add the extra layer then use a Dremel or sandpaper to round/bevel the edge.

I'm thinking about this also, since I'll soon re-create my illustration board armor using sintra type material. Mostly for durability, but also for a thicker look. One thing I'm studying is just how much curve to put on the edges.

When I look at Fett's armor in ESB, it doesn't look all that curved at the edges, just slightly so. I think some armor has too much curve at the edge, makes it look puffy. I want to avoid that look, so I'll probably try a few methods and iterations.

I'm on the verge of trying my first sintra chest build, I'll keep an eye on this thread to see what you come up with

Thought about it and why not just use some sort of edge router with a bevel , should end up with a rounded edge pretty easily

Hey guys, about to buy some sintra in 3mm and 6 mm on Monday. I too think that the 3 mill looks flat unless some sort of edge treatment is done. That's why I'm going to try the 6 mill for the chest and collar. I'm worried about forming the collar piece out of flat material. It looks like it has a couple of different types of arcs/bends on it. I'm thinking of maybe building a MDF mockup to mold it on after I've heated it up. I'll be using the 3 mill for the gauntlets. Anybody find any old posts on working with this stuff, relink it!
Main

This is likely how I'll do it too. I have a small router that I'll mount on a bench and run the parts past it.

Rogermaximus said:
Thought about it and why not just use some sort of edge router with a bevel , should end up with a rounded edge pretty easily
Click to expand...

I looked at the 6mm Sintra side by side with 3mm and man it just seemed to thick, I went with 3mm and am happy with it because it is comparable thickness to my fiberglass chest set, also no need to bevel the edge of 3mm as it is not thick enough to be noticeable.
curious to see a 6mm set though, please update when your in process

Guys, I'm liking the 6 mm Sintra as far as the look goes. My process is to trace out the piece, cut it out on the band saw, sand edge to get it smooth of any blade marks or flaws, then run it over my router table with a 1/8" bearing bit. Makes a nice bevel and looks pretty cool. You can check it out in my build thread here: http://www.thedentedhelmet.com/f20/3rd-times-charm-yet-another-esb-build-lots-scratching-54480/ post number 6.

B
Should I make armour from..

Fiberglassing ABS Armour. Should I?

armour available in the UK..help?